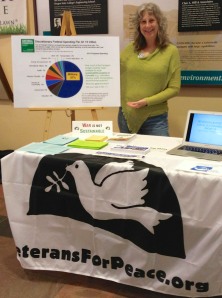 For the past several years, our information pertained to DoD’s heavy carbon footprint and other environmental impacts such as air and water pollution.  This year our message was that Pentagon funding could be reduced and shifted to local projects via federal grants for such things as public transportation, affordable housing, and local food programs.

We used a pie chart from National Priorities Project depicting the President’s 2013 budget request for discretionary spending, of which the Pentagon gobbles up 57%, while energy and environmental programs are allotted only 3%.

There was also information available on the newly released “Back to Work” budget from the Congressional Progressive Caucus, which would take Pentagon funding back to 2006 levels and increase funding for domestic programs such as education and infrastructure, creating much needed jobs.

Take Action:  Call your federal representative and senators and tell them you support the “Back to Work” budget.  It’s due for a vote very soon.  Capitol Switchboard:  (202)224-3121.

Veterans For Peace (VFP) is dedicated to eliminating war as an implement of foreign policy and to that end, works to educate the public about the true costs of war. Veterans For Peace (VFP) Linus Pauling Chapter 132 is a chapter of Veterans For Peace, St. Louis, MO, which has been waging peace since 1985 and is an NGO recognized by the United Nations. The local chapter and the national organization are both 501(c)3 non-profit organizations. Veterans For Peace is made up of veteran and associate members. More information about the national organization, including our Statement of Purpose and contact information for a VFP chapter near you, may be found at: www.veteransforpeace.org.
View all posts by VFP Linus Pauling Chapter →
This entry was posted in Linus Pauling Chapter Actions, Pentagon Budget, War Economy and tagged back to work budget, congressional progressive caucus, Corvallis, linus pauling, national priorities project, pentagon budget, sustainability coalition, VFP. Bookmark the permalink.