The US American Way of War – S. Brian Willson

Hey, MSM and congress critters…Why no hearings on the #KunduzHospital attacks? Why spam us with #BenghaziCommittee coverage? [Bear with us…there’s a theme here.]

Why hasn’t the U.S. government 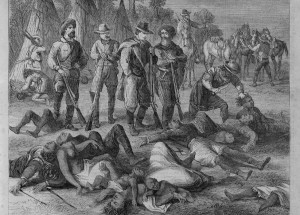 conducted full and thorough investigations into the countless cases of Native Americans, Mexicans, Hawaiians, Filipinos, Vietnamese and many others destroyed by U.S. imperialism? The Canadian government recently completed one such investigation–sadly lacking, but a start–into the real genocide of First Nations, Aboriginal, Inuit and Métis children, which continued into the 1990s. See here and here for some shocking details of that.

In the following piece, our friend Brian Willson gives us a brief historical look at the racist and imperialist way the U.S. conducts war and the horrific outcomes for indigenous peoples.

In Viet Nam, being terribly ignorant like so many others, I “accidentally” discovered, against my greatest wishes, that the US was systematically targeting for destruction, schools, hospitals, churches, and inhabited, undefended villages, often by low-level napalm and 500 pound bombs. These were not accidental. US Army intelligence personnel admitted that hospitals had been routinely listed as targets: “The bigger the hospital the better it was”. Classified USAF bombing manuals defined hospitals, schools, and churches as ‘psycho-social targets’ useful for dissolution of civilian order and decimating morale(1). The US destroyed 13,000 of their 21,000 villages (North and South)(2), murdering upwards of 6 million peasants in South and North Viet Nam, Cambodia, and Laos(3). The US also destroyed over 15,000 bridges; almost 3,000 high schools and universities; 350 hospitals; 1,500 maternity wards; and 950 churches and pagodas(4).

But, from our origins, the US political-military policy, rooted deeply in Eurocentric racism, has revealed an intention to kill civilians and noncombatants alike, and civilian infrastructure. [Continue reading here and please leave some comments there for Brian.]

Veterans For Peace (VFP) is dedicated to eliminating war as an implement of foreign policy and to that end, works to educate the public about the true costs of war. Veterans For Peace (VFP) Linus Pauling Chapter 132 is a chapter of Veterans For Peace, St. Louis, MO, which has been waging peace since 1985 and is an NGO recognized by the United Nations. The local chapter and the national organization are both 501(c)3 non-profit organizations. Veterans For Peace is made up of veteran and associate members. More information about the national organization, including our Statement of Purpose and contact information for a VFP chapter near you, may be found at: www.veteransforpeace.org.
View all posts by VFP Linus Pauling Chapter →
This entry was posted in Foreign Policy, Human War Toll and tagged Brian Willson, cost of war, genocide, imperialism, S. Brian Willson, US, war. Bookmark the permalink.