VFP member protests in early December, 2015 to oppose President Obama’s “Pivot to Asia” may not have been equal in magnitude, if that’s measured in money and force, but these activists certainly produced strong forces which were opposite in direction.

Protesting U.S. military expansion in South Korea and in Okinawa, Veterans For Peace members joined South Korean and Japanese activists by putting their bodies on the line, blocking construction and entry to two sites.

At Jeju Island in South Korea, the U.S. is building a huge naval installation, destroying ecologically sensitive and sacred coastline in the process. The VFP protests are well documented by Ellen Davidson here and in her photos here, here and here, plus Bruce Gagnon’s writeup here–see his several other stories about Jeju in the left side bar of his blog. Bruce Gagnon, who visited Corvallis a few years ago and is the coordinator of the  Global Network Against Weapons & Nuclear Power in Space, is also a VFP member traveling with the group to Jeju and Okinawa.

In Okinawa, it took Japanese police, shipped in from the main island, to dislodge VFP and local protesters blocking the gate of an area set for huge expansion of the Marine Corps facility on the island. This despite the years of protests by local citizens. The expansion will, as described by Gagnon, include “building two runways at Henoko that will jut out into pristine Oura Bay likely killing coral reefs and endangered sea mammals.”  Bruce Gagnon is with the group there now and filed this excellent report.

We applaud the protestors for shoring up the local protests and drawing international attention to the aggressive military expansion in the Pacific by the Obama administration. 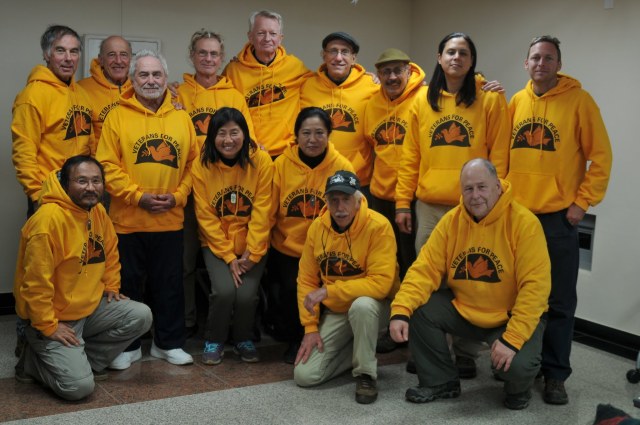 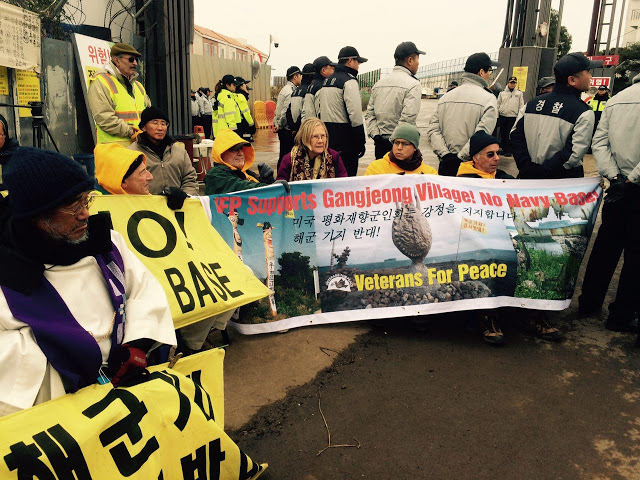 Blocking the gate at the Henoko, Okinawa base. Photo: Ellen Davidson

Veterans For Peace (VFP) is dedicated to eliminating war as an implement of foreign policy and to that end, works to educate the public about the true costs of war. Veterans For Peace (VFP) Linus Pauling Chapter 132 is a chapter of Veterans For Peace, St. Louis, MO, which has been waging peace since 1985 and is an NGO recognized by the United Nations. The local chapter and the national organization are both 501(c)3 non-profit organizations. Veterans For Peace is made up of veteran and associate members. More information about the national organization, including our Statement of Purpose and contact information for a VFP chapter near you, may be found at: www.veteransforpeace.org.
View all posts by VFP Linus Pauling Chapter →
This entry was posted in Foreign Policy, Human War Toll, Peace Activism, Peace News, Veterans For Peace News and tagged bruce gagnon, ellen davidson, japan, jeju island, okinawa, south korea, VFP. Bookmark the permalink.