We get weary of dealing with this meme every year, normally from very well-meaning folks who just don’t understand the historical motivations for going to war.

The word “sacrifice” should be used in this context: “The rich and powerful sacrificed the poor (often people of color), to defend nothing but their own wealth and power.”

You might recall that back in February 2019 our chapter hosted a public talk about a Veterans For Peace project supporting the sailing vessel (S/V) Golden Rule.

Here she is sailing up the Willamette River a few years ago during Fleet Week in Portland.

We collected a few donations at the February talk and threw in a few bucks from our VFP chapter treasury to help fund a trip by the vessel to the western Pacific later this year. More about that trip and the anti-nuclear work the ship and her crew are doing here.

We recently got notice that, due to our fundraising efforts, our VFP chapter has been named an honorary plank owner of the Golden Rule. If you’re not familiar with that term, it goes back to the days of wooden sailing ships. More on that here.

From the letter accompanying the certificate:

We are grateful for your support! The Golden Rule has, once again, taken her place on the seas in memory of the heroic crew that set sail in 1958 to stand in opposition of atmospheric nuclear weapons testing and military aggression. The Golden Rule Project carries on that mission as an important advocate of reason, restraint and non-violent resolution of conflict in a world where war, warfare and nuclear proliferation threatens the extinction of all life on our fragile planet.

Thanks to all our donors and chapter members who helped make the February talk happen and helped fund the Project. 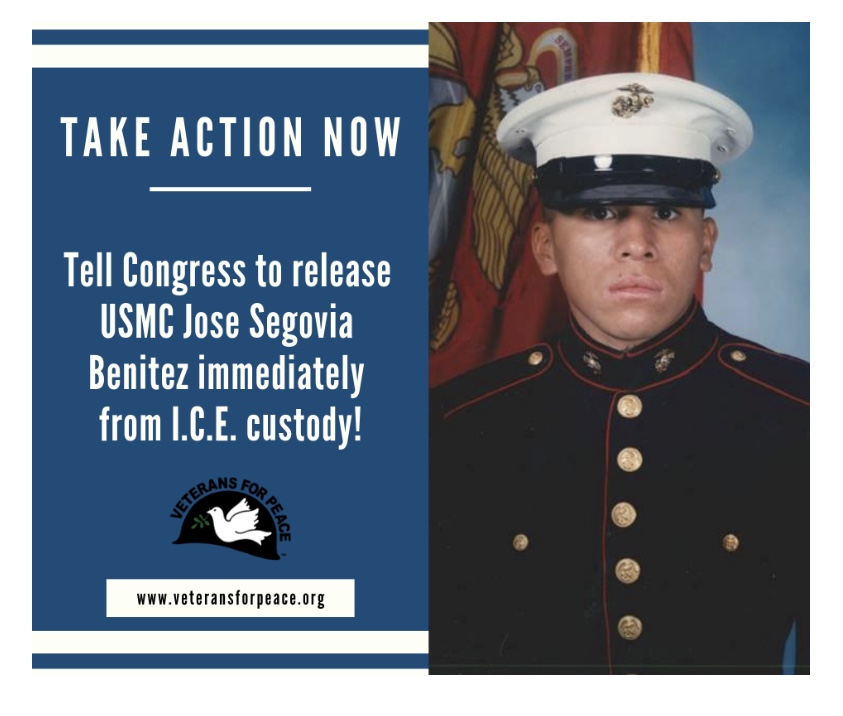 Jose Roberto Segovia Benitez, a U.S. Marine who was honorably discharged, is being held at the I.C.E. Processing Center in Adelanto, California.  Jose has been diagnosed with PTSD/Traumatic Brain Injury and is being denied adequate medical treatment and all of his benefits that are awarded to every U.S. veteran for their service.

Jose has lived almost his entire life in the U.S., graduating high school and then serving in Iraq.  He is scheduled to be deported back to El Salvador, a country he has not lived in since he was a toddler.

The ongoing immigration crisis is a disgrace.  It is well documented that neither an I.C.E. detainment center nor El Salvador is adequately equipped to provide U.S. veterans healthcare.

Tell your Congressional Representative to release USMC Jose Segovia Benitez immediately from I.C.E. custody so he may be able to access specialized medical care for his PTSD, as he is guaranteed within his veterans benefits for serving in the U.S. military.

Members will be in Washington D.C. in April and will deliver letters with your signatures to Congress!

Recognizing the role that two centuries of US militarism have played in creating generation after generation of veterans who fall victim to suicide, Veterans For Peace wants to raise awareness of this underlying cause of over twenty veteran suicides committed every single day in the United States.

We understand suicide is the last remaining means of coping with the violence, horrors, and guilt many veterans internalize while “serving their country.”

The proclamation stated, in part:

“the pervasive culture of militarism in the United States and the ensuing effects on veterans and their families can be partly mitigated through early peace education, nonviolence training, and shifting scarce resources from making war to providing healing and reconciliation programs for the community of veterans; ….”

Mayor Traber read and presented the proclamation to VFP 132 members, Joel Inman and Denis White, at the March 4, 2019 meeting of the Corvallis City Council. Several VFP 132 members along with other veterans and supporters attended the meeting.

Former US Navy member Joel Inman commented while receiving the proclamation, “the danger of battle has not passed when vets return home.”

The original proclamation was originally offered by Eli Smith who has traveled the country, most as a pilgrimage on foot, to heighten awareness about this issue. City counselor Bill Glassmire, also a member of VFP 132, brought the proclamation draft to our attention and helped it reach the mayor’s desk.

If you or a family member is struggling to cope with depression, PTSD, or other precursors to suicide, please get help immediately from your local medical facilities or by calling the suicide prevention hotline, 1-800-273-8255, or by visiting https://suicidepreventionlifeline.org/ for more information.

For more recent news about how the “Defense” Department is trying to cope with this epidemic, see also, https://www.militarytimes.com/news/pentagon-congress/2019/03/05/the-new-plan-to-prevent-veteran-suicides-new-grants-better-research-more-community-focus/ 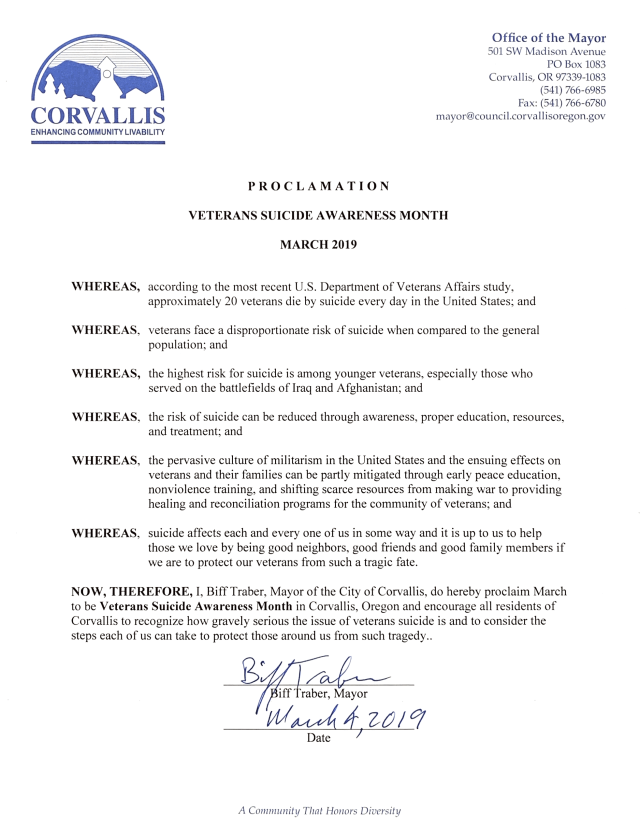 Sailing vessel Golden Rule crew member and Golden Rule Project Ambassador, Zoe Byrd, will show the 25-minute documentary, “Making Waves: Rebirth of the Golden Rule” about four Quaker peace activists, led by Navy veteran Albert Bigelow, who in 1958 tried to sail to the Marshall Islands to stop nuclear bomb tests. The boat sank in 2010 and was rebuilt in Humboldt Bay, California. The Golden Rule, a Project of Veterans For Peace, is now “Sailing for a Nuclear-Free World and a Peaceful, Sustainable Future”.

Making Waves filmmaker, James Seamus Knight, will be attending and will also screen his documentary short, “Holy Week: The Story of the 2016 Sacred Peace Walk.”

Byrd, Knight, and Dr. Richards, all participated in the Great Peace March for Global Nuclear Disarmament, a nine and half month walk from LA to DC in 1986. The three will answer questions and discuss nuclear abolition with the audience following the films.

Hosted by Veterans For Peace, Linus Pauling Chapter, Corvallis, the FUMC Make Peace / Faith in Action Team, and the OSU School of History, Philosophy and Religion.

The event is free and the public is welcome. Donations will be gladly accepted for the Golden Rule Project.

For more info on the Golden Rule Project: http://www.vfpgoldenruleproject.org/

Please note: There will also be an OSU campus event featuring the same films and speakers on February 1, 3:30pm, in Milam Hall, Room 319.

On the 100th anniversary of the armistice ending World War I…

The November 11, 2018 event drew fifty five people from a wide range of political views and groups.

The objective was not to review the long history of US imperialism but to discuss various strategies to confront imperialism, colonialism, and militarism. We enjoyed a lively discussion of everything from revolutionary direct action to foreign policy advocacy to international solidarity.

The strong turnout from students, members of DSA, and the local Communist Party (CPUSA) group was very refreshing. They helped stimulate conversations not normally heard among the usual peacenik “choir” here, while emphasizing the connections between imperialism, violence in our streets, non-state actor blowback, and environmental degradation. These partnerships with our chapter will continue for future public education and radical activism.

“I will come to a time in my backwards trip when November eleventh, accidentally my birthday, was a sacred day called Armistice Day. When I was a boy, all the people of all the nations which had fought in the First World War were silent during the eleventh minute of the eleventh hour of Armistice Day, which was the eleventh day of the eleventh month.
It was during that minute in nineteen hundred and eighteen, that millions upon millions of human beings stopped butchering one and another. I have talked to old men who were on battlefields during that minute. They have told me in one way or another that the sudden silence was the voice of God. So we still have among us some men who can remember when God spoke clearly to mankind.
Armistice Day has become Veterans’ Day. Armistice Day was sacred. Veterans’ day is not.
So I will throw Veterans’ Day over my shoulder. Armistice Day I will keep.
I don’t want to throw away any sacred things.”

–from Vonnegut’s, Breakfast of Champions, 1973 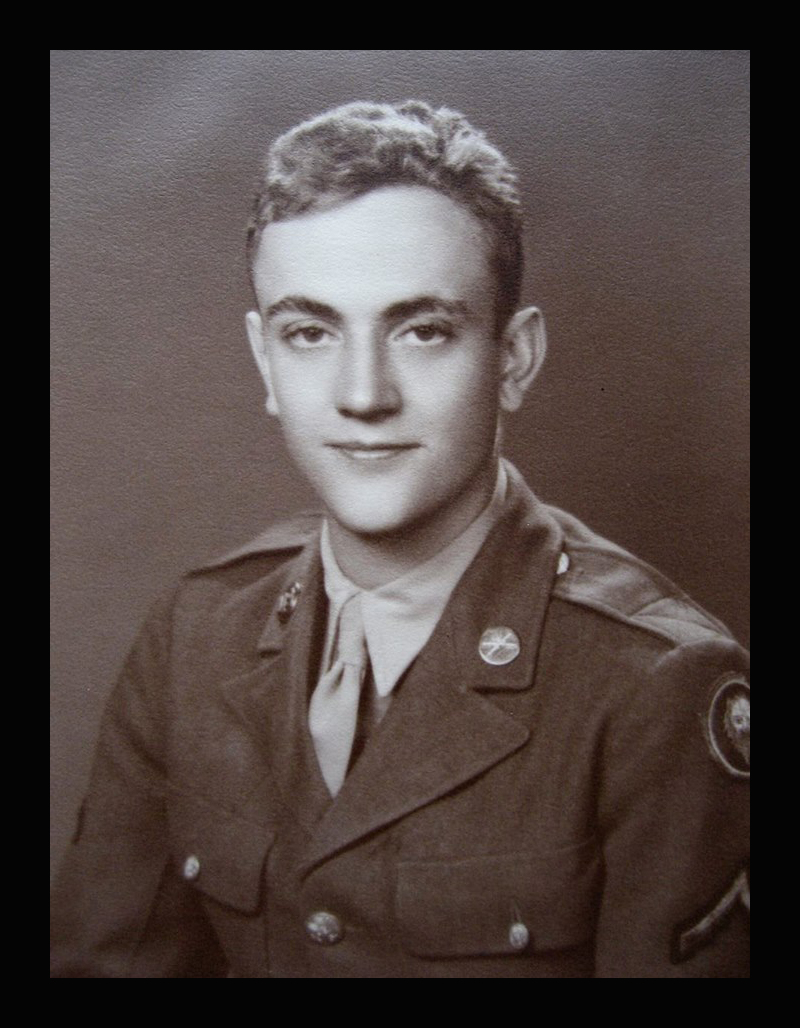