<<LOBBYING TALE OF THE TAPE – NORTHROP TOPS DEFENSE FIRMS: Northrop Grumman topped defense contractors in lobbying spending for the first three months of this year, jumping ahead of Boeing for the top defense slot, according to the latest round of lobbying disclosure filings. Northrop, which won the Long-Range Strike Bomber contract last year, spent $4.7 million on lobbying in the first quarter, more than $1 million above the same time period in 2015.

Boeing was second among defense firms with $4.5 million in lobbying expenditures the first quarter, followed by Lockheed Martin at $3.7 million. General Dynamics jumped up to fourth at $2.5 million. And United Technologies was fifth at $2.3 million – a drop of $1.9 million compared to the first quarter last year, before the company sold Sikorsky to Lockheed.

In all, 20 of the biggest defense firms spent $28.3 million on lobbying last quarter, nearly identical to the total a year ago, according to a POLITICO analysis.>> 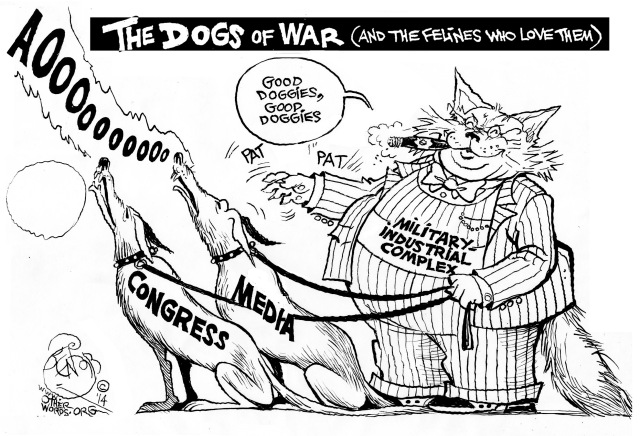 According to a 2014 analysis by the Sunlight Foundation, corporate lobbying is a really good investment–“for every dollar spent on influencing politics, the nation’s most politically active corporations received $760 from the government”…a 76,000 percent return on the lobbying investment. Not too bad.

Veterans For Peace (VFP) is dedicated to eliminating war as an implement of foreign policy and to that end, works to educate the public about the true costs of war. Veterans For Peace (VFP) Linus Pauling Chapter 132 is a chapter of Veterans For Peace, St. Louis, MO, which has been waging peace since 1985 and is an NGO recognized by the United Nations. The local chapter and the national organization are both 501(c)3 non-profit organizations. Veterans For Peace is made up of veteran and associate members. More information about the national organization, including our Statement of Purpose and contact information for a VFP chapter near you, may be found at: www.veteransforpeace.org.
View all posts by VFP Linus Pauling Chapter →
This entry was posted in Pentagon Budget and tagged contractors, lobbying, lobbyist, MIC, military industrial complex, pentagon. Bookmark the permalink.